In the picture below you'll find a scan of the review I wrote of this book for the magazine of the Dutch Society of Safety Science, NVVK Info. This was published there in the May 2014 issue. 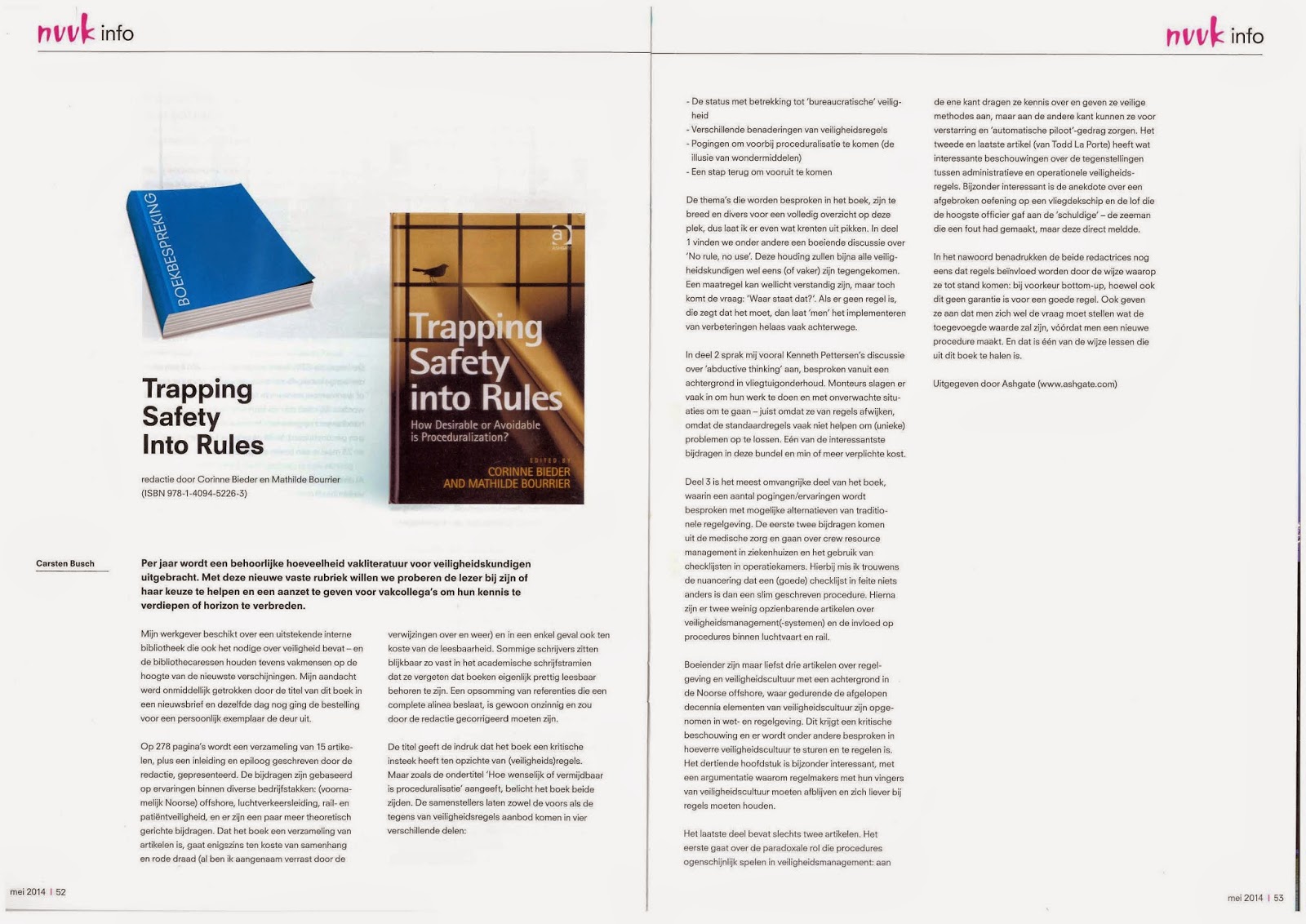 My current employer has a very fine internal library that contains a decent selection of books on safety. The fine ladies in the library also alert professionals to new releases that aren’t in the collection yet, but may be wanted in future. The title of this book immediately caught my attention when it was mentioned in a newsletter and that very day an order for a personal copy went out.

On 278 pages the book presents a collection of 15 articles, plus an introduction and epilogue by the editors. The contributions are based upon experiences within various branches: (mainly Norwegian) offshore, air traffic control, railways and patient safety, and there are also some more theoretically oriented contributions. The fact that the book is a collection of articles slightly affects the coherence and flow (even though I’m pleasantly surprised by the fact that the contributors refer to each other’s contributions quite frequently) and in some cases also the readability suffers. Some authors just seem to have a hard time ditching the academic approach to writing that they forget that books should be easy to read. A listing of references that fills an entire paragraph is just nonsense and should have been caught and removed by the editors.

The book’s title might suggest that the book has a critical stance with regard to (safety)rules, but as the subtitle ‘How desirable or avoidable is proceduralization?’ indicates the book highlights both sides and discusses both the pros and cons of safety rules in four different parts with the following headers:

1: Where do we stand on the bureaucratic path towards safety?
2: Contrasting approaches to safety rules
3: Practical attempts to reach beyond proceduralization: The magic tools illusion
4: standing back to move forward

The subjects discussed in the book are too varied to cover in a full overview here, so let me pick out some highlights. In part 1 we find among others an interesting discussion of ‘No rule, no use’. This is an attitude that almost any safety professional will have met at some time (or even regularly). A safety measure may be wise to implement, but never the less the question arises: “Where does it say that we have to do this?”. Ergo, quite often without a rule saying so, one does not implement a safety measure.

In the second part especially Kenneth Pettersen’s discussion about abductive thinking appealed to me. Me discusses this from a background in airplane maintenance. Mechanics often manage in doing their jobs and dealing with unexpected situations because they deviate from rules. The standard rules often aren’t helpful to solve unique problems, so one has to deviate. This is one of the most interesting contributions in the collection and more or less mandatory reading.

Part 3 is the most voluminous part of the book. It discusses a number of attempts and experiences with possible alternatives to traditional rules and regulations. The first two contributions are from medical care and are about the use of checklists in operation rooms -what I’m missing here is the nuance that a (good) checklist in fact is little more than a very smartly written procedure - and about crew resource management in hospitals. After that we get two little exciting articles about safety management (systems) and their influence on procedures in air traffic and railways.

Much more exciting are no less than three articles about regulations and safety culture with a background in Norwegian offshore where elements of safety culture are implemented in laws and regulations over the last decades. This phenomenon is regarded with a critical eye amd among other things the authors discuss how far it is possible to steer and regulate safety culture. Especially chapter 13 is interesting with its argumentation why regulators should leave safety culture alone and rather stick to rules.

The final part contains only two articles of which the first deals with the paradox role that procedures apparently have in safety management, because they on one side are a means to transfer knowledge and prescribe a safe way of doing a job, but on the other hand they may also cause rigidity and ‘auto pilot behaviour’. The final article by Todd La Porte has some interesting view on the differences between administrative and operational safety rules. Of special interest is the anecdote about the aborted exercise on an aircraft carrier and the praise that the “culprit” (the sailor who had made a mistake, but reported this immediately upon discovery) received from the highest ranking officer.

In the epilogue both editors stress once more that rules are affected by the way they are created (preferably bottom-up, although also this is no guarantee for a good rule) and that one before creating a new rule must ask oneself the question what the added value of a rule will be. One of the leasons to be learned from this book.